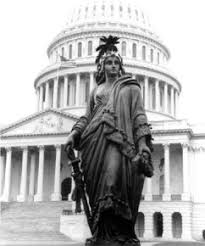 The Origin of Columbia

Today I would like to discuss the Goddess and how it is associated with the capital of America – the District of Columbia. There will be plenty of background information, but I will try to maintain emphasis on the most recent aspect of the goddess as Columbia.

“Though he never set foot in what became the United States, Columbus is often viewed as a hero because of his pivotal role in U.S. history.”

Columbus was fortunate enough to have a very symbolic name.

It would later be used to a great extent in America for it’s many meanings and aspects, and slight historical significance. In fact Columbia would become the name of a new Goddess for a New World (NWO?).

Almost from the moment the New World was discovered, it was seen in mythological terms as an exotic goddess, an Indian Queen dressed in feathers and furs ridding an exotic beast like an armadillo and armed with a tomahawk.

The Catholic south adapted the idea of the Goddess of the New World into the ever-expanding hagiology of the Catholic Church.

The Virgin of Guadalupe allowed the archetype to become personal, a connection to the land and its ancestors, while joining a larger universalist vision inside the Church. In the largely Protestant north, things went quite differently.

As the 18th century passed, and America grew more developed and its people more educated, the Indian princess gained a touch of Greek elegance.

Her Many Other Names

Most Female/Virgin/Goddess symbolism comes from the constellation Virgo.

The Virgin, Virgo was impregnated by God on the Spring Equinox as the Sun passed into Virgo on March 21st. Nine months later the Son of God is born on the Winter Solstice.

Note: i think the statement above its not accurate, I believe that if there was a Son of God, this would have been born on the Spring Equinox (where everything is born again)

God’s sun/son is born or rather re-born every year after the Sun stops on the Tropic of Capricorn for 2 days and on the third day rises from death and is reincarnated into the world. It then proceeds to come back towards the Northern Hemisphere as the “light of the world.”

The New World Virgin Goddess Columbia was just a new manifestation of the ancient consort and virgin mother of god.

Depicted in Christianity as the Virgin Mary, Columbia was created out of Virginia and Maryland. To the Masons, the Square is the female aspect.

Washington’s original plan for D.C. was a large square with the future Washington Monument (male symbol, compass) at the center.

In Egypt the trinity consists of Isis, Osiris, and Horus the son. Isis can be seen as the ultimate female deity.

Isis may be the oldest deity in Egypt, and certainly the oldest to survive the ages in much the same form. She may also be the most important, for although the other gods were worshipped widely, Isis was worshipped almost universally by all Egyptians. The major goddess of the Egyptian pantheon, she had many of the same attributes of other mother-goddesses found all over the world.

Isis was as powerful, if not more powerful, than Osiris and Ra.

Isis was also known as Sopdet, consort of Sah. Sopdet (Spdt, Sepedet) is Sothis in greek. In ‘The Lamentations of Isis and Nephthys for Osiris’, Isis calls herself Sopdet. Sopdet was also connected to the goddess Satet at Abu (Elephantine).

Besides these names, the same aspects of any Goddess can be found in: 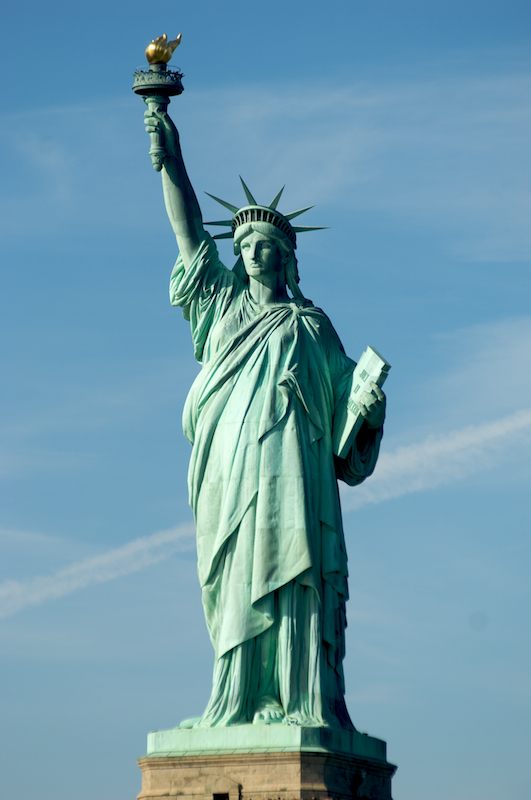 Some may know that it was given to America by the French, but few know it was orchestrated by Freemasons, the secret society, not the government of France. It’s interesting how America accepted a “gift” from a secret society and then put it up in New York Harbor, don’t you think?

Can I donate a monument and have a major city put it up where everyone can see it?  I hope so, because I have some great ideas.

Bartholdi’s original plan for a giant statue of this type was to be placed in a harbor in Egypt.  After his proposal was turned down by the Egyptian government, he changed his design a little bit and approached America to see if he could erect his newly designed statue here. The point is, he originally wanted to build a bizarre statue and have it stand somewhere other than America.  Bartholdi’s first choice for his statue was Egypt, not America.  Go on, sheep, and keep calling the statue American. The original name of the statue was “Liberty Enlightening the World,” not the Statue of Liberty.  Again, the word Enlightening fits in with the Illuminati theme.  Enlightening, enlightenment, light, the sun, intelligence, bright, brilliance, Lucifer.  Are you getting this?  The smart people are.  The zombies probably stopped reading this by now. A near mirror image of the Statue of Liberty stands in France, also on an island, in the Seine River in Paris that was set up in 1889, just three years after the one in America.  If it’s an “American” symbol then why is there an almost identical one in France?  There are actually HUNDREDS of enormous “Statues of Liberty” all around the world. 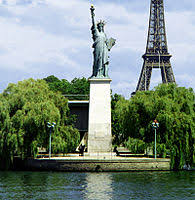 Attributes of the Goddess

The Goddess can be represented in many different ways.

As Venus she is depicted as, or on a clam shell. She is often depicted as a 5 pointed star, or wearing a pentacle as a crown. There’s the Triple Goddess of the 3 phases of the moon. The flag of the District of Columbia has 3 five-pointed stars on it.

As the star Sirius she is the Blazing Star and represents water and the color blue, the Spirit of Wisdom and the Brightly Radiating One or Shinning One.

The sycamore specifically was regarded as a manifestation of the goddesses Nut, Isis and Hathor, who was even given the title, “Lady of the Sycamore.” Also as the virgin Columbian Flower with it’s 5-Petals. As Innana, Isis, Athena and Minerva she is often depicted with an Owl. 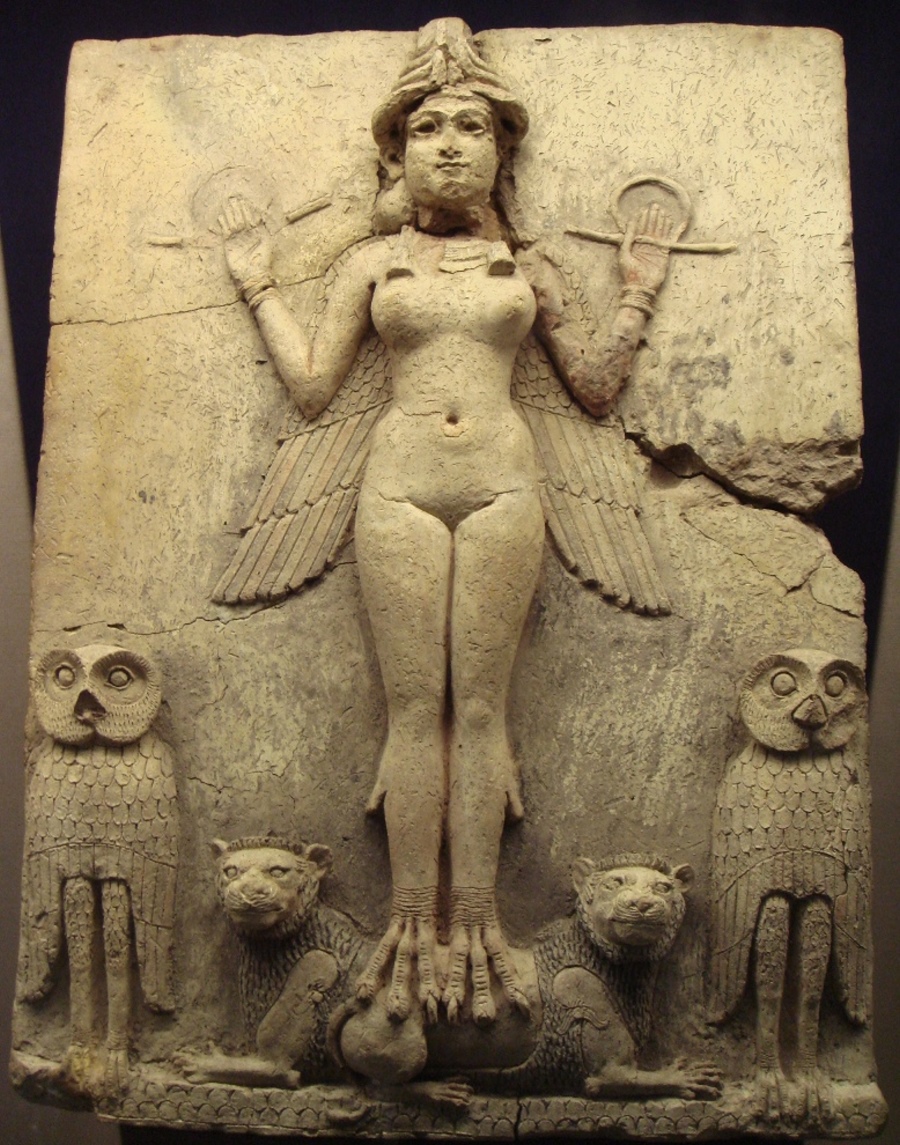 But perhaps the most attributes come when in the form of Columbia.

She is most often shown with an eagle, broken chains and pottery, a cornucopia, images of George Washington, a laurel wreath, a liberty pole and cap, a liberty tree, an olive branch, a rattlesnake, a shield and a stone tablet.

The statue of Columbia that used to stand behind the speaker’s chair in the House of Representatives is a fine example. In this one we see the Eagle, and on the other side a snake coiled around a Greek column.

Early in Egyptian history, Isis had absorbed the attributes of all the great primitive goddesses, and of all the local goddesses such as

…and she was even identified as the female counterpart of the primeval abyss of water from which sprang all life.

The name Mary could have some significance to it’s connection with the sea, the Abyss, or the water of life which brings fertility to the land in the form of rain or annual floods.

Usual English form of Maria, which was the Latin form of the New Testament Greek names Μαριαμ (Mariam) or Μαρια (Maria) (the spellings are interchangeable), which were from the Hebrew name מִרְיָם (Miryam). The meaning is not known for certain, but there are several theories including “sea of bitterness.”