From the very beginning of this growing “crisis” that is the “corona-virus”  — the “Editorial Board” of The Anti-New York Times suspected that something was “off” about the whole matter. There was the hype over a virus which was nowhere near, and is still not near, what any rational person would define as a “pandemic.” There were images, purporting to be from China, of what were clearly crisis-actors wearing masks or lying dead on the street. There are the reported “death tolls” which are actually no worse than various strains of flu which strike every year — or even that of regular colds.

Now, about six weeks into the “crisis,” we begin to see the fingerprints of the usual suspects in the form of irregular economic warfare against Nationalist China and also, by consequence, the artificially inflated U.S. stock market. Naturally, the economic attacks parallel the increasingly politicized attacks now being launched against Chinese leader and Globalist enemy Xi Jinping and, of course, Donald Trump, for their “handling” of the “crisis.” 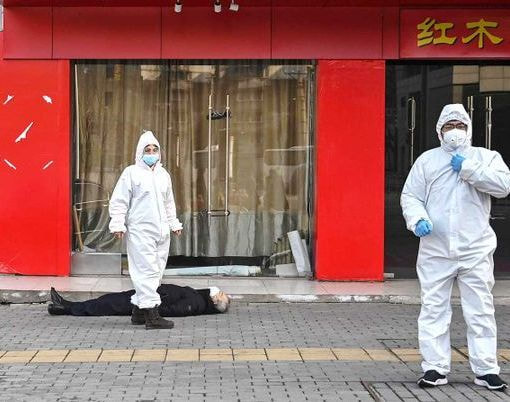 Smile for the cameras, boys.

Evidently, the “dead” guy in all blue resurrected and then “died” again at another location.

Then he resurrected again and died on his belly somewhere else.

St. Sugar noticed that the medical technician in the “iconic” dead man in the street photo is wearing the same style & color sneakers as someone holding a bed pan in an emergency room. This actor gets around!

An article appearing in the January 30, 2020 issue of the elitist Globalist magazine, “The Atlantic,” was already hinting to the muckety-mucks who read such “high-brow” propaganda as to what was to come. Headline: Corona-virus Is Coming—And Trump Isn’t Ready. But the original mocking title of the article (since changed by The Atlantic yet still embedded in the webpage address — here–) was (we kid you not): “Now Trump Needs the Deep State to Fight the Corona-virus” — the remarkable premise being summarized in the sub-headline as follows:

“In order to combat the disease, the president will have to trust the kind of government experts he has disdained and dismissed.”

But it is the opening paragraph of the piece authored by very deep Deep Stater Ronald Klain(cough cough) — who served as Chief of Staff (handler) of both Vice Presidents Creepy Joe Biden and Al “Global Warming” Gore, and also as the “Ebola Czar” under Barry Obongo —   which really gives the game away:

“We all knew the moment would come. It could have been over Iran or North Korea, a hurricane or an earthquake. But it may be the new coronavirus out of China that tests whether President Donald Trump can govern in a crisis—and there is ample reason to be uneasily skeptical.” (emphasis added)

Can you see what this is all about now, boys and girls?

* Klain is now the Chief-of-Staff for “President Biden.”

Now, as for the virus itself, we cannot definitively determine whether (((they))) are grossly exaggerating the potency of one of the various “bugs” which appear each year into a hyped-up bogeyman — or if (((they))) actually created a new and nastier-than-usual strain in some laboratory.

*We now believe that the “new” Coronavirus does not exist, at all!

These devils are not only indeed capable of anything, but they are also in panic-mode over Trump’s ongoing and accelerating purge & replace operation of Deep State traitors at the CIA, DOJ, FBI, DHS, NSC, State Department, Defense Department, Federal Judiciary etc. — along with the expected “storm” promised by Q-Anon ( I have my reservations on Q on other topics) Time should tell us more about the true origin and ultimate deadliness of the corona-virus. Our hopeful hunch is that coronamania — just like every other previous scheme to take down Trump — will fizzle out in a few weeks.

But for now, that question remains a difference without a distinction. What we do know, for certain, is that a Deep State black op scam is being run for Geo-political purposes.