1937: Did the Usual Suspects Blow Up The Hindenburg?The disaster, which occurred here in New Jersey, along with, shall we say, “geo-political” issues eventually brought about the demise of Zeppelins — structures which had been the pride of Germany . 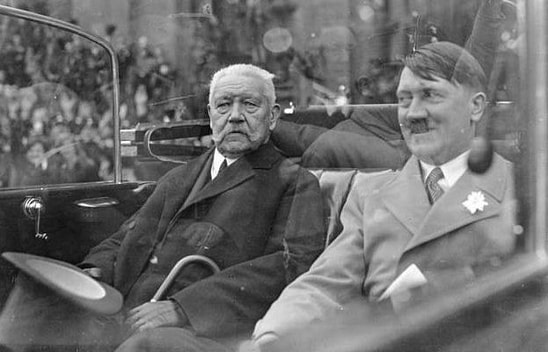 Paul von Hindenburg, left, and Adolf Hitler ride in an open car during a parade in Berlin, Germany, May 1933

He led Germany’s army in World War I and served for nearly a decade as the country’s president, but thanks to his role in Nazi dictator Adolf Hitler’s rise to power, Paul von Hindenburg is an honorary Berliner no more.

Oh well. It was only a matter of time before (((they))) could kill the historical personage of Paul von Hindenburg — whose namesake airship became even better known than him.

A Zeppelin airship takes its name from German Count Ferdinand von Zeppelin — a German General and inventor whose company — Luftschiffbau Zeppelin (LZ)–led the development of the rigid flying machines in the late 1800s / early 1900s. After the great success of Zeppelin’s design, the word “zeppelin” became used to refer to all rigid airships.

Zeppelins were first flown commercially in 1910 by Deutsche Luftschiffahrts-AG (DELAG) — essentially the world’s first airline service. By the outbreak of World War I in 1914, DELAG had made more than 1,500 flights. During the war, the German military made use of Zeppelins for bombing and scouting.

The defeat of Germany in 1918 (engineered by Jewish Marxists at home and Jewish Globalists & Zionists from the outside) slowed down DELAG’s business substantially. In 1919, DELAG’s airships were surrendered under the terms of the vicious Treaty of Versailles which had been imposed upon a disarmed Germany. The treaty also prohibited the Germans from building more airships. An exception was made to allow for the construction of a single airship for the US Navy — a transaction which spared DELAG from total extinction and bought the company some more time.

In 1926 the restrictions on airship construction were lifted at a time when some of the oppressive monetary reparations of the Versailles Treaty were restructured. Work was then started on the construction of the airship, Graf Zeppelin (775 feet) — named after the Count. The company was revived and, during the 1930s, the airships Graf Zeppelin and the larger Hindenburg (803-feet) operated regular transatlantic flights from Germany to North America and Brazil.

To enhance revenue, the zeppelins carried transatlantic mail from the United States to Europe. Special postage stamps were minted and sold for this purpose — but the practice was suddenly discontinued (by the U.S.) and the unsold zeppelin stamps were destroyed by the Post Office (a most unusual act which enraged many stamp collectors (here)) Although neither Hitler nor FDR were in power in 1930, could the sudden discontinuation and strange destruction of the stamps have been the result of a general hatred of Germans held by some people already embedded within the federal bureaucracy? Probably.

The spire of the Empire State Building was originally designed to serve as a mooring mast for the jaw-dropping 750-foot-long marvels of German engineering. But it was found that high winds associated with such high-altitude moorings made the Manhattan mooring idea too impractical. The airships did pass over Jew York during the 1930’s. After 1933, the zeppelins came with Hitler’s Swastika flag on the tail as street-level onlookers gave the “Sieg Heil” salute. “Oy vey!”– the “usual suspects” — who had already, in 1933, “declared war” upon Germany — must surely have shrieked.

The legendary Hindenburg disaster of 1937, which occurred right here in New Jersey, along with, shall we say, “geo-political” issues eventually brought about the demise of Zeppelins — structures which had been the great pride of Germany — both before and during the righteous reign of The Great One(that’s Hitler for all you newbies * normies).

The preceding account is pretty much standard knowledge. But there is a little bit more to the story that (((they))) don’t want you to know about.

Begun in 1932 and finally launched in 1936, the Hindenburg Airship — named after Paul von Hindenburg — measured an astounding 803 feet — but its beautiful interior could only accommodate about 100 people, a number which includes the well-to-do passengers and crew. General Hindenburg, we should note, was the respected World War I general and later president of Germany who — in order to break the contentious multi-party gridlock that was crippling Germany — named, albeit somewhat reluctantly, Hitler as Chancellor in 1933.

Prior zeppelins had always been designed to stay afloat using helium — a gas which is not flammable. At the time, however, helium was only available in industrial quantities from plants in the United States. Despite a U.S. ban on the export of helium under the Helium Control Act of 1927, the Germans designed the Hindenburg to use helium in the belief that the US government would license its export. But that assumption was made before FDR and his Jewish-Marxist gang took over America in 1933.

When the designers learned that FDR’s administration would not allow helium to be shipped to “Nazi” Germany, the Hindenberg was re-engineered to use hydrogen for its lift instead — a gas which is flammable. The man responsible for denying helium to Germany was Secretary of the Interior Harold Ickes — a fanatical German-hater and FDR Marxist. Though the German engineering geniuses were still able to construct a very safe airship — because hydrogen was flammable — there now existed an opportunity for an “accident” with a plausible “explanation” for it.

On May 6, 1937, at the very moment that the Hindenburg was docking before an awed crowd at Lakehurst, NJ, the grand airship burst into flames and crashed, killing 35 of the 97 passengers & crew. “Static electricity” was blamed, yet the Hindenburg had previously endured direct lightning hits! The true cause of the explosion remains unknown to this day. But the unusual amount of news reel cameras present that day, the helium embargo, the timing of the mysterious ignition just as the ship was mooring, the hyping of the idiotic “static electricity” theory, and the anti-German hysteria being whipped up by the press all combine to suggest that the Hindenburg disaster was actually an act of sabotage. Theories ranged from an on-board fanatic-bomber to an incendiary rifle-bullet fired from the nearby woods. The incident shattered confidence in Germany’s zeppelins and marked the end of the airship era. How conveeenient.

And now, more than 80 years after the dramatic killing of the Hindenburg Airship, (((they))) are still out to kill Hindenburg’s name — even though the Marshall, being of an aristocratic background, was never actually a true supporter of Hitler’s populist movement.