The American authorities previously admitted that Ukraine hosts “biological research facilities“, expressing concerns they could come under the control of Russian forces. 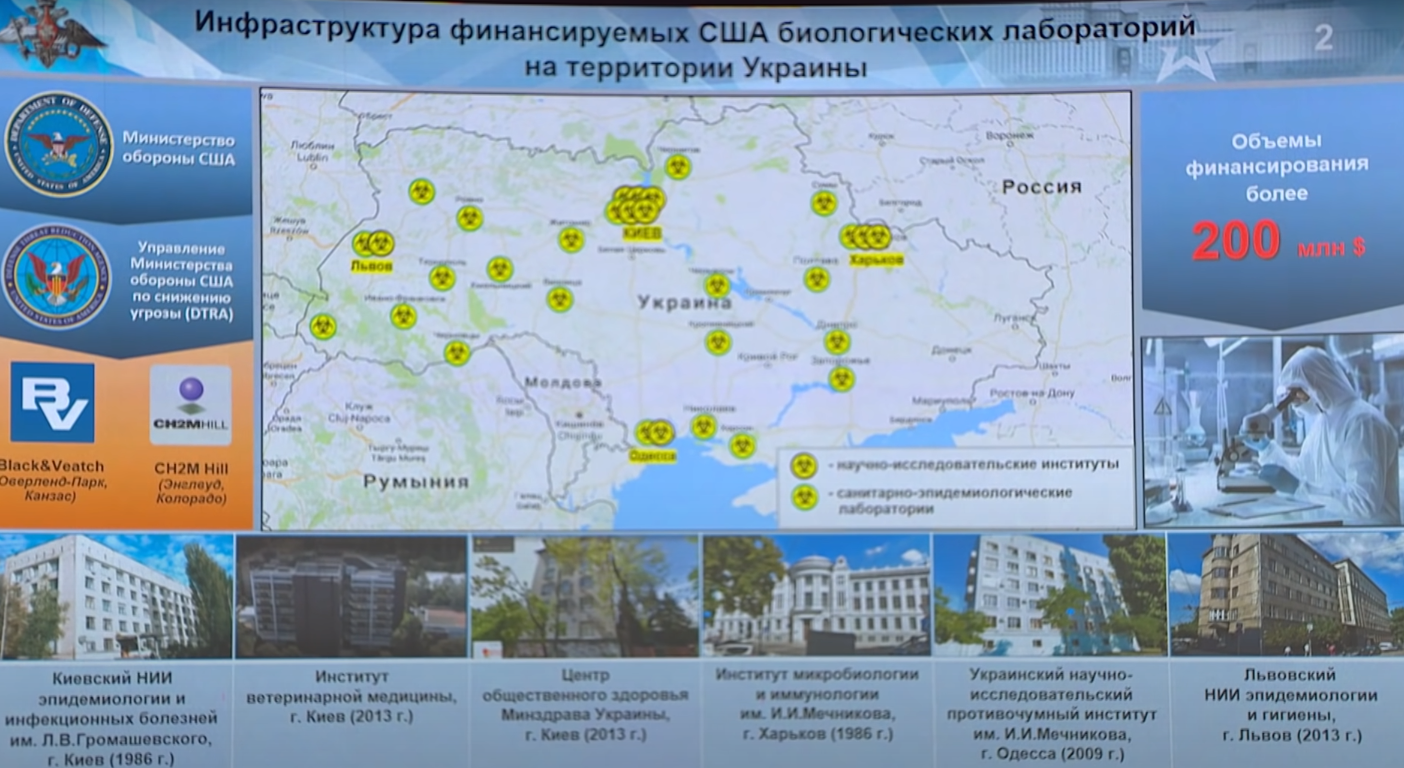 The Russian Defence Ministry on Thursday announced that the US-funded biological labs located in Ukraine were conducting experiments with bat coronavirus samples:

“According to the documents, the American side planned to conduct work on pathogens of birds, bats, and reptiles in Ukraine in 2022, with a further transition to studying the possibility of carrying African swine fever and anthrax”, chief spokesman for the Ministry of Defence Major General Igor Konashenkov said.

In addition, the facilities were studying the possible spread of pathogens via wild birds, migrating between Russia, Ukraine, and other countries in the region.

The purpose of this – and other Pentagon-funded biological research in Ukraine, was to create a mechanism for the covert spread of deadly pathogens”, he added.

The Russian Defence Ministry will soon publish the documents received from staff at the Ukrainian biolaboratories, as well as the results of their examination, Konashenkov said.

The Russian MoD noted the United States spent more than $200 million on the work of biological laboratories in Ukraine – the laboratories of the central sanitary and epidemiological directorate of the Ukrainian Defence Ministry participated in the US military biological programme.

While the US initially slammed information about its bio warfare labs in Ukraine as “fake”, on Tuesday, Under Secretary of State for Political Affairs Victoria Nuland admitted the existence of US-funded “biological research facilities” in the country.

Moscow has spent years expressing concerns about the activities of US-funded biolabs in Ukraine and other post-Soviet republics, including Kazakhstan, Tajikistan, Kyrgyzstan, Armenia, and Georgia.

Another strange COVID vaccine life form has been discovered under the microscope, this time made of aluminum and carbon. The discovery was made by a Polish doctor by the name of Dr. Franc Zalewski.

Another strange COVID vaccine life form has been discovered under the microscope. It is yet another tentacled creature – and an aluminum-based life form.

Throughout his video presentation, he calls it “the thing.” He found it in the Pfizer Comirnaty vaccine shot, in 1 of 3 vials he studied. Dr. Zalewski’s discovery comes on top of the research of many other independent doctors, scientists and researchers (Dr. Robert Young, Dr. Carrie Madej, Dr. Zandre Botha and Dr. John B.) who also found that the COVID vaccine contains all sorts of questionable and outright horrific contents – graphene, nanometals, PEG, parasites, self-propelling creatures with tentacles, synthetic fibers and synthetic self-assembling circular structures.

So what is this thing? Similar to what Madej found under the microscope, it’s some kind of synthetic creature with tentacles. Zalewski compares it to something from a science fiction movie, including The Matrix, which contained an entity which “flies, had tentacles, and attaches itself to other things.”

In this case, Zalewski carefully measured “the thing” and discovered the ratio of its head to its legs (a head of 20 microns/micrometers to legs of 2.5 millimeters, which equals a ratio of 1:125).

He believes that “the thing” will grow and develop inside people’s bodies, commenting:

“It seems to have a head and 3 legs … It hasn’t been created to just sit there and do nothing … This is a life form … It grew/developed in 4 days … Is this a plant? Dust? ‘A being’ given to people in eggs in a fertile/ suitable environment. Somewhere closeby there might be some sort of signal which caused that being to start living. Just as pinecone seeds won’t grow unless they will be in a suitable environment on fertile ground, the same “that thing” seems not to be moving. It may be dormant/sleeping … I hope it won’t be activated.”

Zalewski also points out that he saw more than of these creatures, putting to rest any claims this was just a coincidence.

Indeed, with all the discoveries that have been made now, replete with microscopic imagery, could anyone who has looked squarely at the evidence still believe this is some giant coincidence rather than the coldly calculated transhumanistic agenda?

Zalewski suggests that graphene in the vaccine acts as a kind of food or catalyst for “the thing” because the vaccine contains the eggs of “the thing” which appear to hatch in the presence of graphene.

Independent analysis of the COVID vax continues worldwide. Speaking of Pfizer and graphene, there is another video circulating (with German subtitles) that claims to show the contents of the Pfizer vax under a microscope. The video starts of with lots of tiny white dots or points, and some black ones too. As it progresses, you can see the points slowly connect to make lines, which reinforces a key theme of the synthetic life forms contained within the COVID non-vaccines: self-assembly.

The COVID Vax Is A Tool Of Bioterrorism And Transhumanism

NWO (New World Order) propaganda promotes the idea that you need to be scared of new threat of bioterrorism and that government will save and protect you. You do need to watch out for bioterrorism but government will be the one perpetrating it, not preventing it. The real bioterrorism is not from some make-believe virus but rather contaminated fake-vaccines with horrific synthetic parasites which, the evidence would suggest, can self-assemble, self-replicate and proliferate inside the human body.

Zalewski comments several times that people have taken the COVID vax voluntarily. Voluntarily. And now many of them will probably harbor aluminum-based life formsinside their bodies. There is so much information now rapidly coming out exposing the COVID vax contents.

Hopefully, this information will be shared around the world and will help, by its horrific nature, to put an end to the COVID scamdemic more quickly than it would otherwise have ended. Hopefully, a realization will dawn on those who have been programmed by the mainstream narrative, or who are still on the fence, so they awaken from their slumber and understand what is truly happening here.

Thanks to a FOIA request by The Intercept, we now have smoking gun proof that Anthony Fauci directed NIH funding for bioweapons research on SARS-CoV-2 (via “gain-of-function” experiments) under the cover of the Chinese Communist Party.

The 900+ pages of once-secret documents also confirm that the United States government originated the bioweapons research and funded it to completion.

After Trump banned biological weapons programs in the United States, Fauci and others conspired to criminally conduct illegal research by shifting the technology to China (and laundering US taxpayer money through the EcoHealth Alliance to fund it).usa

As detailed by The Intercept:

NEWLY RELEASED DOCUMENTS provide details of U.S.-funded research on several types of coronaviruses at the Wuhan Institute of Virology in China.

The Intercept has obtained more than 900 pages of documents detailing the work of EcoHealth Alliance, a U.S.-based health organization that used federal money to fund bat coronavirus research at the Chinese laboratory.

One of the grants, titled “Understanding the Risk of Bat Coronavirus Emergence,” outlines an ambitious effort led by EcoHealth Alliance President Peter Daszak to screen thousands of bat samples for novel coronaviruses. The research also involved screening people who work with live animals.

The bat coronavirus grant provided EcoHealth Alliance with a total of $3.1 million, including $599,000 that the Wuhan Institute of Virology used in part to identify and alter bat coronaviruses likely to infect humans.

In essence, thanks to the FOIA revelations, we now know that:

We also therefore know that the vaccine is an extension of the bioweapons program funded by Fauci, since the spike protein incorporated into covid vaccines was developed through Fauci-funded gain-of-function research.

With this knowledge now being made public thanks to The Intercept, all vaccines should be halted worldwide, and criminal indictments should be leveled against Fauci and the thousands of co-conspirators who were complicit in this operation, which includes Big Pharma CEOs, virology scientists and freedom-hating politicians who used all this as an excuse to push toxic bioweapons onto the population via “vaccine” mandates.

BOMBSHELL: The US Government Started This As A MERS Bioweapons Program To Mass Murder People In The Middle East, But It Was Switched To Murdering Americans When Trump Took Power

The other huge bombshell now emerging from all this is that it appears the US government was originally planning to deploy its bioweapons as a MERS (Middle Eastern Respiratory Syndrome) virus to mass murder political enemies in Iran (and other nations) under “President Clinton” (who was slated to take office in 2017 after the 2016 election was rigged).

But when Trump’s military intelligence white hats blocked the election rigging of 2016 and Trump took office, the bioweapons program was redirected to focus on killing Americans and dethroning Trump with the coordinated covid-rigged election scheme of 2020.

So the bioweapons that the US government originally planned to dump on the people of the Middle East ended up being refocused on SARS-CoV and placed into vaccines to be injected into US soldiers and 200+ million American citizens, all in an effort to carry out mass genocide against the American people and its active duty defenders.

All along, Fauci was taking orders from the Obama / Clinton cartel which had sought a seamless transition of power to the Clinton regime but was thwarted by the outpouring of popular support for Trump.

Thus, by definition, Fauci, Obama, Biden and the U.S. deep state have been working with communist China to build and deploy weapons of mass destruction against the American people. Nearly all Democrats are fully on board with this effort, since they hate America and openly call for the killing of conservatives.

Shockingly, they’re also all-in on committing vaccine suicide by injecting themselves with the very bioweapon that was deployed to stop Trump. So what we’re about to witness in the years ahead is mass death of Democrats and whatever conservatives have been propagandized enough to inject themselves with the death shots labeled “vaccines.”

Finally, the vaccines are not designed to kill people immediately upon being injected. They’re actually designed to impair the immune system and prime the body to overreact to a future release of a viral variant that sends the body into immune reaction overdrive.

This is called Antibody Dependent Enhancement, and for it to be fully invoked, a new variant must be introduced and circulated that evades the antibodies produced by the current vaccines (what we call covid vax 1.0). It appears that the Delta variant has already achieved somewhere around a 65% evasion, but upcoming variants will demonstrate even stronger evasion / escape properties.

The real bombshell is that the same Fauci / Daszak / Baric bioweapons program that built SARS-CoV-2 could have already constructed a radical variant that functions as the second part in the binary weapon system. This new variant — perhaps one that’s already released or soon to be released into the wild — would result in mass fatalities of those who took covid vaccines, even if they survived the more immediate vaccine adverse reactions such as blood clotting and heart attacks.

The US Army just conducted a three-day exercise in collaboration with the New York City Police and Fire Department. The exercise simulated a nuclear and biological event on the NYC subway system and Yankee Stadium.

Similar drills are scheduled for Philadelphia and Los Angeles in the coming months of September and October.

This raises concerns because the US Military has a track record for conducting experiments on the population using deadly pathogens without the population’s knowledge or consent.

Right now there is no proof that anything nefarious is taking place. But if history has taught us anything, it’s that government exercises and drills provide the perfect the cover to conduct covert and illegal operations. The same sort of cover a declared pandemic provides.